Educating Voters is the Goal of SABE GoVoter Project

Have you ever been told who to vote for while you were at the polls? Or perhaps, because 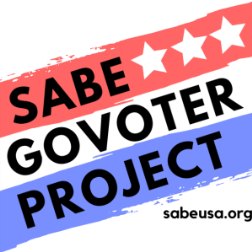 of your disability, a poll-worker assumed you were incompetent and treated you like a child?

If this hasn't happened to you, consider yourself lucky. Unfortunately, voting issues like these happen to people with disabilities often. Voting is a right, and there are organizations doing their best to assure people know their rights.

The SABE GoVoter Project is a three-part training series where we learned the ins and outs of voting. Some of the questions we answered were:

Thanks to the training we got through the SABE GoVoter Project, Ohio advocates are now equipped to go around the state and train others. Our mission is to make sure people with disabilities know their rights when it comes to voting. We also want people to know about the accessibility accommodations that are available.

If your upcoming conference is in need of a voting session or you feel your agency, organizations or company could benefit from voting training, please email Stacy Brannan-Smith, Communications & Outreach Manager at Disability Rights Ohio, at sbrannan-smith@disabilityrightsohio for more information.

We'd also like to give a huge thanks to the sponsors of this amazing project: the Administration on Community Living (ACL), National Disability Rights Network (NDRN), Disability Rights Ohio (DRO), the Ohio Self Determination Association (OSDA), Hamilton County Developmental Disabilities Services, and the Council of Ohio Leaders (COOL).

Remember, your vote counts. Don't miss an opportunity to have your voice heard.

Shari Cooper is a strong advocate for everyone who lives with a disability. In her position as Public Relations Assistant for Goodwill Easter Seals Miami Valley, Shari is the "blogger-in-chief." She's also a columnist for the Dayton Daily News Editorial pages and an award-winning speaker. This year, she served as the official emcee for DD Statehouse Advocacy Day, introducing advocates as well as the Governor, Lieutenant Governor, the Director of the Ohio Department of Developmental Disabilities and other speakers. She even gave a TED talk at TEDx Dayton in 2014 called "Are you OK with yourself?" But the role she cherishes most is that of disability awareness advocate.