In Ohio, people with disabilities who want help getting and keeping a job can get services through Opportunities for Ohioans with Disabilities’ Bureau of Vocational Rehabilitation (BVR) or Bureau of Services for the Visually Impaired (BSVI).

Disability Rights Ohio’s Client Assistance Program (CAP) exists to provide advocacy, mediation and legal assistance for people who are working with OOD and BVR/BSVI  in pursuit of an employment goal.

“CAP was created to help people with programs that were funded under the federal Rehabilitation Act of 1973, including BVR, BSVI and the Centers for Independent Living,” she explains. “The vast majority of the calls our team gets are related to vocational Rehabilitation (VR) services.”

According to the OOD website, VR services are customized for each individual through assessments and one-on-one meetings with professional VR counselors. VR services are available in all 88 counties.

VR services are supposed to provide the things an individual with a disability needs to get and keep a job. Some services, such as transportation or personal care assistance, can only be given to help an individual participate in another VR service, such as training or assessments. In general, VR will not pay for a service if there is another source of payment available at the time, like health insurance to pay for medical treatment.

OOD also has a financial needs test that determines when and what it will pay for when an individual attends college or other training programs. When an individual is ready to seek employment, OOD will normally pay for job skills training and job development services.

People most commonly call DRO for help because communication has shut down.

“We mediate when conversation has stopped," Corner relates. “We have a lot of success mediating during the appeals process. With VR, there must be a vocational goal, and then you work backward to determine the steps necessary to get that job. Sometimes that requires creative solutions to show BVR that a person is capable of more than they think.”

In one case, and older man wanted to go to law school, but he had never gotten an undergraduate degree. BVR was reluctant to agree to "attorney" as his vocational goal. Ultimately, a compromise was reached wherein the gentleman was given several milestones he would have to meet along this path to law school so BVR would feel comfortable helping him get there. If the milestones were not met, another vocational goal would be determined. BVR ultimately accepted that plan.

Corner wants individuals who are working with BVR to view DRO as a resource.

“The VR process can be confusing,” she admits. “We can help people understand the process. If they have a question about what their counselor is saying, we can help. If they just want us to give advice without telling BVR, we can do that. And where there is a clear violation of the law, we can take legal action. We are here to help.” 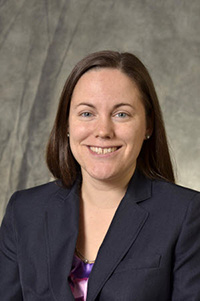 In the United States, money and status talk, and those without either often go unheard. Disability Rights Ohio Attorney Emily White grew up in a poor, rural community where there was not much opportunity.  Once she got out into the world, she quickly realized that her outspoken nature could be used to advocate for equal rights under the law.

After graduating from the University of Illinois with a degree in philosophy, she worked for Habitat for Humanity as an Americorps volunteer in New York City. The experience gave her a view of poverty issues, housing issues and gender inequality issues, since so few women work on construction sites, making it clear that law school should be her next step.

She went to the City University of New York law school, which is entirely focused on public service law. To make it possible for its graduates to follow through on their civil-rights-focused career dreams, the highly competitive CUNY program has very low tuition and provides childcare.

“My class was only 100 people, and it’s very cool to see what all of them are doing now,” White explains.

After graduation, she clerked for a federal judge and then worked for Legal Aid of Cleveland, focusing on poverty and consumer law. At Disability Rights Ohio, she’s a member of the employment team, helping people access competitive integrated employment. She’s particularly interested in helping people get out of sheltered workshops and into competitive employment.

“That work is really compelling to me,” she says. “There are people working in sheltered workshops who are talented, but they have been told that they are only 10% as productive as a typical worker, so they don’t deserve more than what they’re getting at the workshop. They work full-time but earn almost nothing. I am currently representing a young man who is paid only $14 for a week’s work. The people I get to work with are those who want change and choice. They want different opportunities. They’re the ones who call us to help them find other options.”

Helping people with disabilities follow their career dreams is a fulfilling part of her job. She recalls a young man with autism, who wanted to be an engineer. He needed help with social situations and and basic self-care, such as keeping a schedule or remembering to take a shower. He wanted to go to college, and he found a program at Marshall University in West Virginia that would provide the supports he needed. He was accepted, but at the last minute, vocational rehabilitation services in Ohio told him that they wouldn’t pay for the supports he needed to succeed in the program. White worked on the case, and they ultimately reversed their decision.

She heard from him after his first term. He’d taken a heavy load of classes, including a lot of calculus and physics, and he’d gotten straight As.

“He’s going to be a civil engineer, but if the system had gotten what it wanted, he could have gone to a sheltered workshop,” she says. “His earnings potential has skyrocketed, and that’s better for everyone.”

Ohio Works First is meant to give families financial assistance for up to three years, with the ultimate goal to move people out of public assistance and into self-sufficiency. A portion of that program includes job training to increase the potential for employment for all adults in a household. In early 2013, legal aid agencies around the state, including Disability Rights Ohio, started to see a pattern: people with disabilities were being denied benefits under the program or were not being given the accommodations they needed to be successful in their job placement. The coalition believed these denials violated the Americans with Disabilities Act (ADA).

On May 9, 2013, the Ohio Poverty Law Center, representing the coalition, sent a letter to the Ohio Department of Job and Family Services (ODJFS), outlining their concerns and requesting a meeting to discuss possible solutions. The state immediately recognized the validity of the complaints and met with the group several times over the following six months to draft new statewide rules and a county ADA compliance plan template. During the drafting process, DRO requested several additions that were ultimately included, including more specific definitions of “disability,” the use of service animals and the responsibility counties have to communicate with people in a way that is accessible to them, such as large print, Braille or American Sign Language.

The new rules went into effect on October 1, 2014. Counties are required to submit an ADA compliance plan using the state-provided template or their own that is substantively similar by December 8. DRO will be monitoring the implementation of the plans. Individuals who have problems getting access to Ohio Works First because of their disability should call DRO at 614-466-7264 or 800-282-9181; (TTY) 614-728-2553 or 800-858-3542 and select option 2 for intake.

State Representative Dorothy Pelanda has introduced House Bill (HB) 624 and Senator Shannon Jones has introduced a companion bill, Senate Bill (SB) 365, in the Ohio General Assembly. These bills would formally establish in law rights of individuals who under guardianship. Examples of these rights include the right to vote, the right to be married, and the right to be free from abuse and neglect. The bill also requires the distribution of a Guardianship Guide, which has been prepared by the Ohio Attorney General’s office with input from Disability Rights Ohio and other disability stakeholders. This guide clarifies the duties and responsibilities of guardians and the rights of individuals who are under the care of guardianship. These bills were introduced afterThe Columbus Dispatch released a series of articles detailing the problems with Ohio’s system of guardianship. DRO will continue to monitor the progress of the legislation and any other developments on the improvement of Ohio’s guardianship system.

Senator Eric Kearney and Senator Peggy Lehner introduced Senate Bill 367, a bipartisan legislation measure that would replace the words "mental retardation" with the words "intellectual disability" or other appropriate language within state law. An earlier effort to remove this outdated and offensive language started in 2009 with a measure by former Senator Jimmy Stewart, and SB 367 would greatly expand on that effort. In practice, the use of these words has been largely reduced and replaced with more appropriate language, but the words are still formally included within Ohio’s Revised Code. Removal of this outdated language is a large step towards using person-first language – or language that does not define an individual by their disability, but as a person first. Disability Rights Ohio applauds the efforts of Senators Kearny and Lehner and will continue to monitor the progress of this bill.

Election Day is November 4 - Our Hotline will be Open

DRO in the News

Jennifer Smith-Richards interviewed DRO Executive Director Michael Kirkman about the Ohio Department of Education's report on the use of seclusion and restraint in schools.

Columbus Dispatch - Use of seclusion, restraint in Ohio schools quantified

DRO is part of ongoing efforts to improve oversight of Ohio's guardianship system. In the first link, DRO is mentioned as an organization that helped with Attorney General Mike DeWine's creation of a new handbook for guardians. In the second, Kirkman expresses concern about the Ohio Supreme Court's delay in impementing new guardianship rules.

Columbus Dispatch - Rules for guardians in Ohio? Not until 2015

The City of Toledo and Lucas County are locked in a debate about who is responsible to provide accommodations for trash pickup for people with disabilities. Reporter Ignazio Messina interviewed DRO Director of Advocacy Kerstin Sjoberg-Witt.