Disability Rights Ohio (DRO) and the Ohio Brain Injury Program recently announced the results of a three-year study designed to identify the service gaps that prohibit those with traumatic brain injury (TBI) from living in the community. TBI, as defined by the Centers for Disease Control and Prevention (CDC), disrupts the normal function of the brain. For this project, 38 individuals, currently living in Ohio nursing facilities and ranging in age from 23 to 78 years, were interviewed from October 2017 to January 2020. The data collected offers insights into the changes that can be made in state support systems to give persons with TBI a meaningful opportunity to move into their communities with supports.

A standard interview protocol was used to gather information from patients with TBI and their family members and caregivers living in 16 facilities in 11 different counties across the state. The majority of interviewees were male, and 17 of the 38 interviewed were younger than 50 years of age. The most common cause of the TBI was a motor vehicle crash, with the second most common reason falls/jumps.

Common themes emerged from the interviews. “Family members reported that the decision to place their loved ones in a nursing home was made out of necessity, as they could not get help handling behaviors like heightened aggression and self-inflicted injuries at home,” said Kristin Hildebrant, Senior Attorney with DRO and the Report’s lead author. “What was striking, however, was that almost every person interviewed knew nothing about Medicaid’s Home and Community Based Services (HCBS), which provide supports for people to live in the community instead of a nursing facility; they had not been given the option to participate in the program.”

Frequently, mental health issues were cited as the reason for nursing facility placement and one barrier identified by caregivers to staying in their communities. Many of the persons with TBI also had multiple mental health diagnoses. Nearly 75 percent were prescribed psychotropic medication. Compounding the problem, there appeared to be a lack of awareness among nursing facility employees about TBI. Most direct-care staff did not know the definition of TBI or how to differentiate it from dementia or stroke.

In addition, many Ohio nursing facilities contacted by DRO reported that they did not have any residents with TBI, even though data reported to the Center for Medicaid and Medicare Services (CMS) suggests that there are many people with TBI living in Ohio nursing facilities. “According to results of the 2019 Long-term Care Minimum Data Set (MDS) 3.0 Frequency Report, Ohio has approximately 960 nursing facilities reporting 1,323 patients with an active diagnosis of TBI,” said John Corrigan, Director of the Ohio Brain Injury Program. “Somewhere, there appears to be a disconnect between the number of residents staff recognize as having a TBI and the number being reported to CMS.”

Conclusions and Recommendations
Based on the interviews, several conclusions can be drawn and recommendations made to give individuals with TBI in nursing facilities a meaningful opportunity to move into their communities with supports.

• Individuals with TBI, their families, caregivers, and nursing facility staff need to be better educated about options to support living in their communities, including Medicaid’s HCBS program. It would also appear that the existing HCBS system needs to provide additional services (especially behavioral supports) to support people with TBI.

• The overreliance on medication instead of other services – counseling and therapy – should be evaluated.

• Additional professional development to identify individuals with TBI and ways to improve their care should be provided to all nursing facility staff.

“For those individuals with TBI who are still at home, and struggling to find supports, coordinated prevention efforts should be initiated in order to prevent a nursing facility placement,” noted Kerstin Sjoberg, DRO Executive Director. “Increased services are needed – particularly behavioral health services – in order to provide support to people with TBI.” 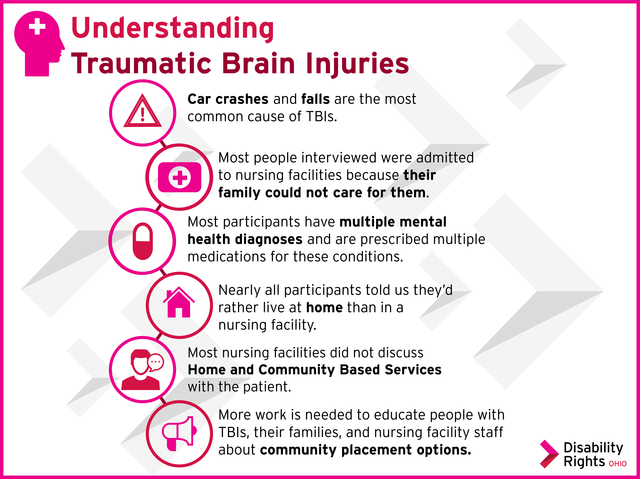