His needs weren't being met in the classroom. We helped get him support to succeed. #AdvocacyMatters 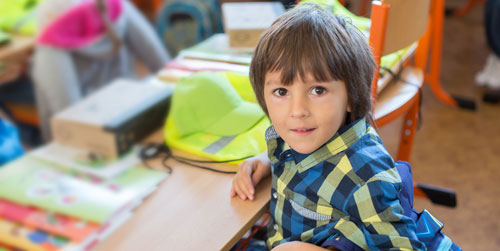 When he was in kindergarten, Jonathan went to a school for students with autism, but his mom felt that he would do well in general education classrooms with the right support. However, when he entered first grade at his new school, his mom noticed significant changes in his behavior and discovered that school staff were frequently restraining and removing him from the classroom and not telling her about it. She needed assistance in asking the school to create a better environment for Jonathan. She called Disability Rights Ohio for help.

DRO's Ingram-White Castle Special Education Fellow and another DRO attorney attended a meeting with the school and Jonathan's mom where the team developed a behavior plan that would best support him. Additionally, DRO assisted Jonathan's mother in writing a letter to the school district superintendent regarding the school's failure to report that Jonathan was restrained. As a result of the letter, an investigation revealed that the school was not properly reporting restraints, and staff were ordered to be trained to resolve this issue.

Since the adoption of his new behavior plan, Jonathan's behavior has improved and the amount of time he spends removed from the classroom has decreased. With more time in the classroom, Jonathan can focus more on academic progress and achievement.

This level of in-depth service work is made possible with support from the Ingram-White Castle Foundation and The Columbus Foundation. If you need help, contact us, and find resources to help advocate for the students in your life on the Special Education page of our Self-Advocacy Resource Center.