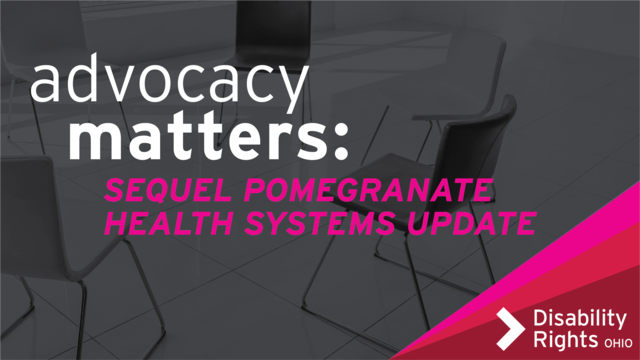 At Disability Rights Ohio (DRO), our work hinges on advocacy. As part of our mission, DRO regularly monitors and investigates abuse, neglect, and exploitation, then we advocate for individuals impacted. In 2019 and 2020, DRO conducted an extensive investigation at Sequel Pomegranate Health Systems (now called Torii Behavioral Health Systems), a facility that operates both a youth acute psychiatric hospital and youth residential treatment facility (RTF).

The story starts more than two years ago, in June 2019, when DRO received complaints about physical abuse and bullying at Sequel Pomegranate. The harrowing reports prompted DRO to conduct a thorough investigation into the culture, safety, care, rights education, and rights protection occurring for youth at the facility. In February 2020, during DRO’s active investigation, Sequel Pomegranate agreed with the Ohio Department of Mental Health and Addiction Services (OMHAS) to suspend new admissions to its acute psychiatric hospital for 120 days.

Sequel Pomegranate’s story doesn’t end there: It wasn’t long after our investigation and report—through another agreement with OMHAS in December 2020—that Sequel Pomegranate Health Systems agreed to relinquish its license to operate the RTF. In addition, the facility agreed not to apply for a new operating license for the RTF until at least October 2021 while also meeting specific conditions. By January 2021, the acute psychiatric hospital once again started accepting new admissions. However, just last week, we received news that Torii Behavioral Health Systems—the for-profit corporation’s new name for Sequel Pomegranate—voluntarily relinquished all of its OMHAS licenses and certifications, including its license to operate a private psychiatric hospital.

This news is huge for Ohio’s disability-rights advocates—DRO’s investigation, which focused primarily on the RTF, uncovered serious and systemic cases of abuse and neglect, violations of safety and treatment standards, inappropriate use of restraint, peer-to-peer bullying and staff intimidation, and overall infringement of civil rights. Despite frequent opportunities to address these concerns, the infractions remained throughout our entire investigation.

DRO’s Associate Advocacy Director, Amy Price, described a sense of relief after getting word that the facility would close its doors in early October:

“All children deserve welcoming, clean, safe, structured, trauma-informed environments that support them on their individualized treatment journeys and help to facilitate their recovery and growth in the most multiculturally inclusive and the least restrictive environments possible. Residential treatment facilities and acute psychiatric hospitals are locked facilities. They are not community-based treatment options. I’m very proud of the work our team and community has done to continue to shed light on injustices.”

This facility is just one of many we’ve worked with in recent years. In fact, DRO’s Abuse and Neglect team works year-round to monitor facilities, provide recommendations, and launch investigations when presented with probable cause. At the start of the pandemic, the team continued monitoring facilities remotely until we could ensure a safer return. Now, the team continues both remote and in-person monitoring to best advocate for Ohioans with disabilities, ensuring they have the right to receive care free from abuse, neglect, and exploitation.

We know there’s still much work to do. Today, we want to recognize and thank the advocates who helped illuminate incalculable injustices that needed brought to light. You—the individual, the family member, the advocate—are crucial in all the work we do. Together, our #AdvocacyMatters.